The Sherwood Park Farmers’ Market at Festival Place is a small but powerful market. The website states they have about 80 vendors but I’m not sure how accurate those statistics are at this point in the season. It felt more like 50 but that’s okay; quality over quantity. The place was hopping.

The usual suspects are there: the lemonade stand, the bison hot dog guy; the kettle corn, the green onion cakes, but what I like best about the Sherwood Park Farmers’ Market are the one-man (or one-woman)stands like Cecile of Herbal Roots and her heirloom seeds, the quiet farmer from Broadview Farms with his colourful carrots and curly spinach, or Bill Garriock of Garlic’s Purity Plus.

The first time I walked by, Mr. Garriock said his dressing was the best dressing in Canada. I guffawed. I’ve snorfed back a few thousand Caesar salads in my day and there have been some mighty fine tasting dressings in the bunch, but I was intrigued. I gave him my $7.50 and told him I’d let him know if I agreed. 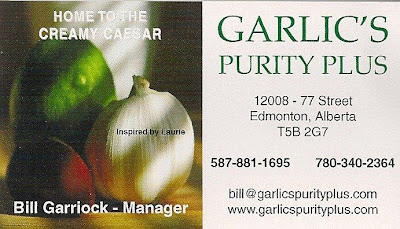 I have a washtub-sized bowl that we call the “buckshizzle”. The word is probably spelled “bauch schüssel” in German which translates to “belly bowl” in English. This makes sense because if you were to strap this bowl on to the front of your body, it would give the appearance of having a big belly. I remember my (German) mom using the term often when she referred to her own “buckshizzle” that she used for making bread dough in. Hers was double the size of the one I have now.
So, I filled up my bauch schüssel with greens and home-made croutons and tossed the lot with some of Bill Garriock’s dressing. Five of us were at the table that night and I kid you not, we were almost fighting each other for the last few leaves in that bowl. I went back this week, told Bill that his Caesar Salad dressing was indeed worthy of his claim, and purchased two more jars. You can refrigerate this dressing for up to six months and the best part is, it has no added preservatives, no added salt or sugar, no dairy, no malt vinegar AND its gluten free.

Bill is in the process of bringing black garlic to town and not only that, he is also working on a black garlic bruschetta. Now that’s something I’d like to try. If any retailers are interested in carrying this product, contact Bill at the info above.

I love this time of year at Farmers’ Markets when the bounty of the harvest is so wonderful that you just want to buy every fruit and vegetable and jar of pickles that call out from overburdened tables.

But just as I was getting all full of summertime-feel-good, I was told that my picture taking was not sitting well with some vendors. In fact, one feller told me it was against the law to take pictures without getting approval first. Actually, anyone has the right to take photos of people and places deemed public. In fact, the Canadian Charter of Rights and Freedoms guarantees us “the freedom of thought, belief, opinion and expression, including freedom of the press and other media of communication.” But the man wasn’t in the mood for conversation, not mine anyway. Perhaps if he was sitting downwind from the lavender sachets at the Herbal Roots stand, he would’ve benefited from the calming properties of this beautiful flower.

Of course I couldn’t imagine how someone could object to having their wares photographed and promoted on a blog. Maybe some fruit in the crowd is on the lam and fears being seen on America’s Most Wanted? You take your chances. Farmers Markets are no place for fruits on the lam. Fruits and lamb however do go quite well together if you’re talking Moroccan food.

We all know what to do when you’re handed lemons right? Make lemonade.